Join NASA in the nation’s capital to celebrate the 45th anniversary of Earth Day on the National Mall and at Washington’s Union Station. 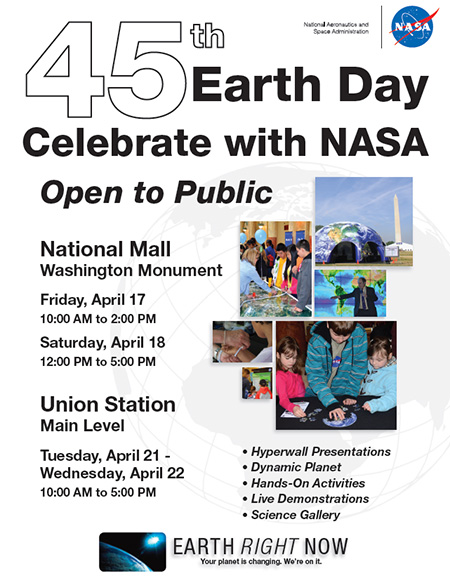 Join NASA in the nation’s capital to celebrate the 45th anniversary of Earth Day, April 17-18 on the National Mall and April 21-22 at Washington’s Union Station.

During this annual celebration of the Earth and its resources, you can see amazing NASA visualizations of our dynamic planet and listen to presentations by NASA scientists that reveal the big picture of Earth’s interrelated systems. Members of NASA’s Earth Observing System Data and Information System (EOSDIS) will be on hand to see if you are a “Super Sleuth,” and able to identify Earth features in images from NASA’s many Earth observing missions by following fun clues. You also can watch stunning videos on NASA’s cutting edge Hyperwall and participate in hands-on activities with help from NASA educators, such as calculating your carbon footprint or creating a cloud in a bottle.

NASA’s EOSDIS provides end-to-end management for NASA’s Earth science data, which are acquired continuously from field observations, aircraft, and a fleet of Earth orbiting satellites. These data are processed, archived, and distributed through a network of 12 discipline-specific Distributed Active Archive Centers, or DAACs.