According to the Fourth National Climate Assessment, climate change has made its appearance, touting the world with extreme weather conditions, including increased heat waves, rising sea levels, and increasing devastation from wildfires, to name just a few. A combination of ground- and satellite-based data provides a unique view of the globe to better understand the impacts of climate change. These measurements help scientists, researchers, and decision makers prepare for risk and response to events but also in forecasting events and assessing the post-event impacts. NASA, in collaboration with other organizations, has a series of instruments that provide this information for understanding a number of phenomena, including wildfires.

NASA is particularly interested in wildfires because they are looking at the Earth system and how changes to that system can have environmental, societal, and economic impacts. What is causing the changes and what can we do to mitigate impacts?

Scientists, researchers, land managers, decision makers, etc. are using wildfire data in numerous ways (to see some of the data in action, check out our Data User Profiles or our Wildfire news). Wildfire data can be used to forecast events. By acquiring data on precipitation, soil moisture, drought severity, topography, land surface temperatures, and vegetation density and extent, land and/or wildlife managers can perform pre-fire mapping to indicate potential areas of risk. Near-real time wildfire data, looking at total area burning, fire radiative power, etc., can be used to assess risk in a given area and develop a more efficient strategy for response. Wildfire data can be used in post-fire mapping, incorporating total burned area, burn severity, and vegetation regrowth. Whatever your mission, NASA has data to meet those needs.

Choose from below the fire application of interest.

Benefits and Limitations of Data

Benefits and Limitations of Data
In determining whether or not to use remotely sensed data for wildfire assessment, it’s important to understand both the benefits but also the limitations of the data.

Risk and Response - Near Real Time

Risk and Response - Near Real Time 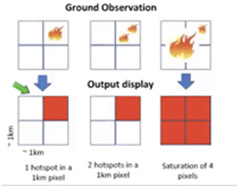 NASA’s Land, Atmosphere Near real-time Capability for EOS (LANCE) provides data to the public within 3 hours of satellite overpass, which allows for almost near-real time (NRT) monitoring and decision making. Specifically for fires, both MODIS (Moderate Resolution Imaging Spectroradiometer) and VIIRS (Visible Infrared Imaging Radiometer Suite) provide a quick look at hotspots, fire and thermal anomalies, and the smoke plume movement. There are some differences between the data sets that must be considered in planning. Each MODIS active fire location represents the center of a 1km pixel that is flagged by the algorithm as containing one or more fires within the pixel, whereas VIIRS has an improved spatial resolution of 375 m, which provides a greater response over fires of relatively small areas.The 375 m data also has improved nighttime performance. It is important to note that the NRT products are not quality checked and a predicted geolocation is used.

There are two primary ways of exploring NRT fire data, or Fire Information for Resource Management System (FIRMS) - through an interactive map or by direct download of the data if you know the region in which you are interested. The interactive map provides daily global MODIS and VIIRS fire locations, as well as, burned area. These active fire data are also made available for download once you know your region of interest. The data are downloadable as shapefiles, KML, text, etc. 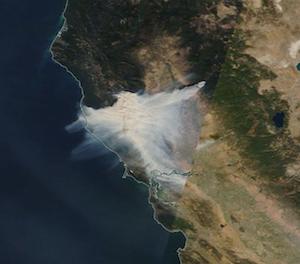 Aerosols as a result of the smoke and ash from the fire as well as the plume and its movement through time can also be measured using NASA satellite data. The Worldview tool provides the capability to interactively browse over 800 global, full-resolution satellite imagery layers and then download the underlying data. Many of the imagery layers are updated within three hours of observation, essentially showing the entire Earth as it looks "right now". Using MODIS or VIIRS data, one can follow the smoke plume and its movement through time. Also, one can assess the aerosol optical depth (which can be converted to particulate matter with specific algorithms), carbon monoxide, sulfur dioxide, etc. at the fire location, where and when available. If you would like to then download the data for further analysis, the data download option allows you to access the specific data products in the original format (see the data access tools section).

Fire Forecasting
Many factors contribute to a fire, its intensity and its severity. As such, its important to monitor contributing factors in order to predict the formation of a fire and how it will move through the environment. NASA has several data sets for making these predictions.

Post-Fire Impacts
Wildfires have enormous impacts on the surrounding area, including burned area, changes in runoff, landslide potential, etc. In some areas, this is measured through observation-based estimates of post-fire effects. However, remote areas or rugged terrain often impede measurements. Remotely-sensed data provides a means to extend our knowledge in these areas.

Other Fire-Related Resources
The Global Wildfire Information System is a joint initiative of the Group on Earth Observations and the Copernicus Programs. The Global Wildfire Information System (GWIS) aims at bringing together existing information sources, including NASA’s MODIS and VIIRS data, to provide a comprehensive view and evaluation of fire regimes and fire effects at a global level.

HDF and NetCDF files can be viewed in Panoply or customization can be done once the data of interest are selected, either by selecting the gear (see figure to the right) or if downloading multiple files, choose customize product and then select GeoTiff as your output file format. Note that you can change your projection as well as choose only those bands of interest.

For a Panoply Orientation - https://www.youtube.com/watch?v=WNs5ZdZMhQY&list=PLO2yB4LGNlWoyJ02Z3kNlYNWqD1KfbtVT&index=26&t=0s

For a tutorial on creating plots in Panoply: https://www.youtube.com/watch?v=dTvxE5zcY08&list=PLO2yB4LGNlWoyJ02Z3kNlYNWqD1KfbtVT&index=27&t=0s

Worldview provides access to visualization of many data sets in NRT, that is 3-hours after acquisition. All of the visualizations for a particular area of interest are accessible via the add layer button. They are categorized by the hazard or disaster, i.e. fires (see below). 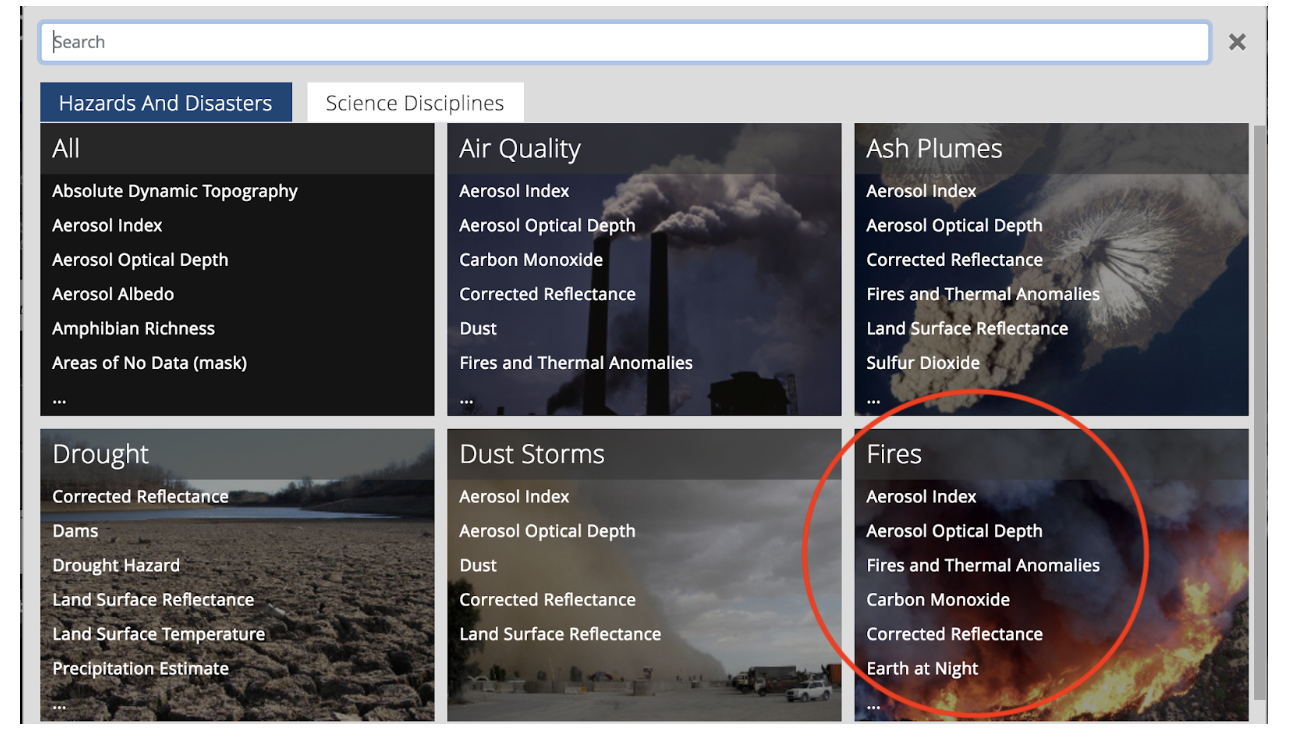 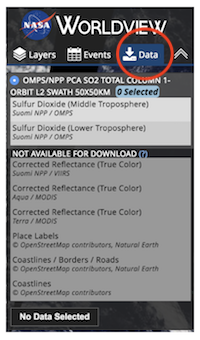 Within Worldview, visualizations of different measurements or dates can be compared using the "Start Comparison" button. A snapshot of the visualization can be downloaded as a PNG, JPG, GeoTIFF or KMZ file. If the original data is needed, the Data tab provides access to the downloadable data sets.

For a tutorial of Worldview, see the Earthdata webinar, Explore the Earth Every Day.