As wildlands shrink, scientists study the ecologies that people have tamed.

Flood waters were rising near the small farming village in China where ecologist Erle Ellis was staying. He scrubbed his research project and evacuated, but he would return. Ellis had been studying the ecology of the Yangtze Delta since the early 1990s, yet he was often surprised by how its people and ecology overturned his assumptions.

Neither flood nor repeated famines have managed to wipe out the people who have lived here for thousands of years. Long ago, they reshaped the landscape to grow rice in swampy paddies in the vast plains of the Yangtze and up into the hillsides. Houses settled on the valley floor, ringed with gardens and trees. Generations farmed the still-thriving land.

It is strange to find an ecologist studying land settled by people. Historically, ecologists have studied wild places. But Ellis thinks it is time for ecologists to pay more attention to landscapes with people, and he is using Earth science data to prove the point. 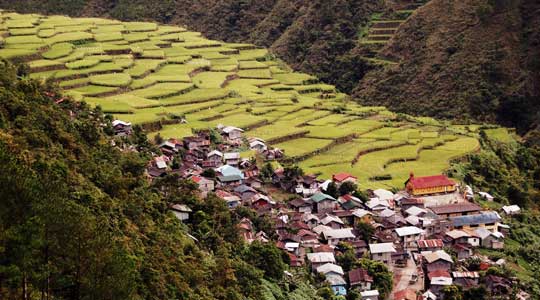 The Yangtze Delta is home to more than eighty million people in an area only a little larger than the state of Indiana. How does the land support this much agriculture and so many people, and can it continue to thrive? It is a question that continues to intrigue Ellis, and that may teach our teeming numbers to wisely manage the lands that feed us.

When he first came to China, Ellis expected to see older forms of agriculture persisting. He wanted to study small farms, and talk to farmers who still worked them by hand. He expected to be wading knee-deep in rice fields fertilized by manure. Ellis felt it would be vastly different from most farms in the United States that worked more like factories, using machinery and chemicals to grow food on a large scale. “We think of agriculture as being something out there far away with big machines,” he said. “In most of the world that is not the case.”

Chinese farms did look traditional at first glance; people worked the rice paddies by hand, sometimes using water buffalo instead of tractors. Up close, Ellis saw modern ways arising from agricultural science, such as the heavy use of chemical fertilizers. “Today about a third of the world’s fertilizer is used in China—but almost all of that is applied by hand,” he said. In spite of some residue of older practices, Ellis thinks that traditional systems, which rely on local knowledge and natural resources, are almost completely gone.

Like other nations around the world, China is using technologies like fertilizer and pesticides to boost production and feed its population. “It is quite a rare thing now to have a highly productive traditional agriculture, because there is not much desirable about it,” Ellis said. “Famines were common.” Before the 1970s, Chinese scholars over a thousand years recorded large numbers of famines every year across the country. Although crop failures and food shortages are not the only factors in famine, growing and storing a surplus of food can help avert famine. The high nitrogen content in chemical fertilizers can double and triple crops, compared to fertilizers like manure. “In China that is not a trivial thing,” he said. “If you cut their yields in half, without massive imports, people would starve.”

Ironically, while other countries are taking up industrial-style farming, many in the United States are calling for more local and organic farming, thinking that it is more environmentally friendly. Chemical fertilizer can pollute groundwater and surface water, especially when it reaches coastal waters. Too much nitrogen in soils can even reduce plant growth. Heavy doses of fertilizer added to the soil can break down and wind up as more nitrogen in the atmosphere. Nitrogen oxides, which are ozone-depleting chemicals and greenhouse gases, contribute to global warming, along with carbon emissions from heavy machinery and long-distance transportation of food. “Humans have doubled the amount of reactive nitrogen in the nitrogen cycle globally,” Ellis said.

So small changes in little villages, added together, can matter in a big way. But few ecologists seemed to be studying places that people live.

I produce, therefore I am

After his years in China, Ellis thought the landscapes people use, and their large-scale impacts, were poorly understood. Part of the reason was how ecologists viewed the Earth. “If you open atlases or global change textbooks, you see maps of biomes of the world. This is how you depict what the world looks like,” said Navin Ramakutty, at McGill University. 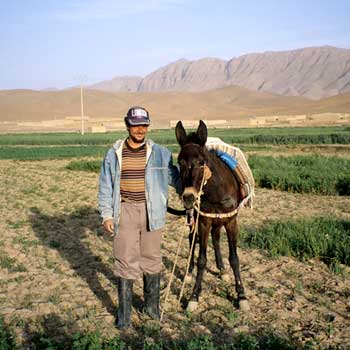 Ecologists use biomes to classify the global patterns of ecology on land, based on vegetation types that correspond to global patterns in climate. The different biomes—lush tropical forests, hot arid deserts, grasslands, or cold, arid tundra—can each support unique kinds and amounts of life. They also make different contributions to the global carbon cycle.

Like other modern sciences, ecology strives for objectivity by reducing the complexity of the systems they study. One way to do this has traditionally been to isolate human influence from observations, by studying areas presumed to be wild. The lands that we influence, such as croplands and cities, tend to be excluded from consideration, or squeezed into just a few land classifications, where they were largely ignored by ecologists until recently.

But almost seven billion people live on Earth today. “We know instinctively that this is not what the world looks like any more,” Ramankutty said. Ramankutty and Ellis are among a growing number of ecologists who think the classic focus on wildlands does not match the state of the Earth today.

Ellis noted, “What is the ecology that people create and sustain over a long period of time? In the past, this was a very marginal subject for ecologists. If you have people in your ecosystem it’s not really ecology. It’s a degraded thing, an unimportant ruined thing. For me that was always very frustrating.”

People in the map

Ellis thought that data could show how much of the Earth is under human influence. “I wanted to quantify and express in a powerful way to ecologists the significance of anthropogenic ecosystems,” he said.

He proposed to Ramankutty, who had been using global data to study patterns of land use for agriculture, that they look at population and land use statistics. Ramankutty said, “The sheer number of people affects ecosystem processes in the village landscapes that Erle had been studying. He thought of extending this idea to a global scale.”

As they melded global data sets on population, land use, and land cover, patterns emerged. Ellis said, “There was no obvious method for determining the big categories of the anthrome system, so we did a statistical approach that figured out the global patterns in these data.” The researchers saw a new biome system, with human-dominated ecosystems that they called anthropogenic biomes, or anthromes for short.

The analysis produced two major insights. Ramankutty said, “First, an astonishing amount of the world’s landscape, up to 77 percent, is an anthrome.” People have taken over most places on Earth that can support human life. Some wildlands remain in rainforests, but most are in cold, arid, northern areas. “Second, we usually think of people living in cities between forests, or between forests practicing agriculture,” Ramankutty said. “We think of our influence as being small. That’s not the way the world works anymore. We currently have human systems within which natural systems are embedded.”

The data also showed more human-influenced categories than just the classic cropland or urban area biomes. Ellis said, “There’s this incredible richness of systems and ecosystems that we create and sustain. For example, in the temperate zone you see trees. Just about every system, urban or agricultural, has trees. We create mosaics; we hardly ever create one thing. When you look at the Earth from space—when you look out of the airplane—you can see it.”

The ecologies of these mosaics were a question mark for researchers. Ramankutty said, “We think that you can have valuable ecosystems in places where humans live. There can be valuable carbon stored in trees in urban landscapes. There are more trees in cropland anthromes than in wildland anthromes. We should measure those things as well.” 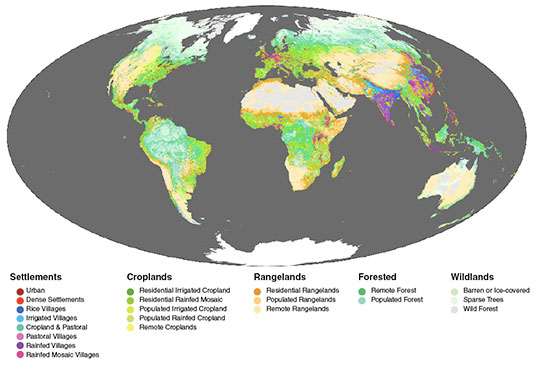 The result of their analysis is now published as a data set at the NASA Socioeconomic Data and Applications Center (SEDAC). Users can obtain mapped data on anthropogenic biomes, for the globe or for one or more of six regions. In all, the analysis defines twenty-one classifications of biomes; only three are wild.

The researchers think the data and the new classifications show that the field of ecology can no longer ignore human influence. While classic biome systems are by no means obsolete, Ramankutty said, “We shouldn’t always be jaunting off to the middle of the rainforests to study how ecosystems work. We should be studying ecosystems in places where people live and manage land.”

To know that humans dominate Earth can be unsettling. Ellis said, “The way we value nature is challenged in some way by the idea that most of the planet has been transformed into human systems already.” Humans need to understand and manage the lands they use and live in, now and for the future.

Ramankutty added, “You start by talking about the negative—that humans are really in control of ecosystems around the planet. Compared to other species we have been extremely successful, and we have had an impact on a global scale.”

“But the positive thing is, that same story tells us humans are extremely capable. If we set our minds to it, we should be able to find new solutions to continue to flourish on this planet.”