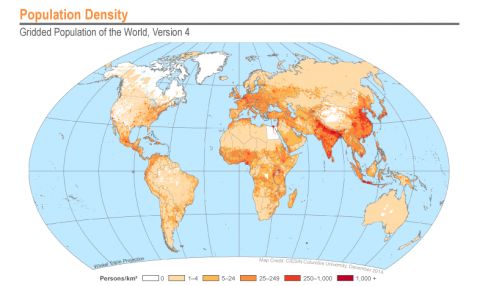 Map of Global Population Density from the Gridded Population of the World, Version 4 data collection.

The Gridded Population of the World (GPW) is a global, high-resolution population data collection produced by NASA’s Socioeconomic Data and Applications Center (SEDAC). NASA SEDAC is one of twelve NASA Earth Observing System Data and Information System (EOSDIS) Distributed Active Archive Centers (DAACs) that manage, archive and distribute Earth science data as part of NASA's Earth Science Data Systems Program. During the webinar, participants will be introduced to the NASA SEDAC Gridded Population Data of the World. This will include a history for the product, but will focus primarily on the newly developed data- GPW version 4 (GPWv4). This data collection was derived from information from the 2010 round of global population census and consists of a series of 1 kilometer grids. The GPWv4 collection will include data sets on population count and density for the target years of 2000, 2005, 2010, 2015, and 2020, as well as quality metrics and essential metadata to guide users on how to use the grids. Additionally, data on land area estimates, inland water location and fraction, and other vital contextual information will be provided. Presenters will discuss the methods used to develop GPWv4 and highlight the challenges, solutions, and lessons learned during the process. Moreover, applications of GPW to research and policy questions will be discussed.

Participate in our monthly webinars to learn more about NASA Earth science data sets, services and tools to discover, access and use these data. View past recorded webinar videos.