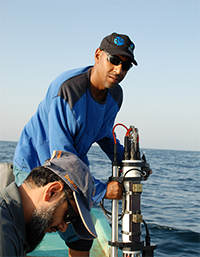 Current research focus: Al-Azri and his team are working to unlock the secrets of why periodic harmful blooms of algae, plankton, and other microorganisms are occurring in the Sea of Oman and the Arabian Sea – and what these blooms may mean for the biodiversity and industry of Oman and other Persian Gulf countries.

“Almost all the countries bordering the Persian Gulf are impacted by these blooms,” notes Al-Azri. “For Oman, these harmful algal blooms pose a unique problem as our country … is not a major producer of oil but relies on fisheries, aquaculture, and tourism for its economy. Thick blooms have also been seen to cause coral reef mortality and impact the diversity of marine life.”

“We use NASA’s ocean color chlorophyll products to routinely study the evolution of these blooms and track their movement along the coast,” notes Al-Azri.

Research findings: From an analysis of satellite sensor data and data collected at research stations along the coast of Oman, Al-Azri discovered that blooms caused by one species of harmful algae (Cochlodinium polykrikoides) are being triggered by low oxygen and nutrient-rich water brought to the surface by cyclonic eddies. In addition, it appears that human activities coupled with the unique oceanographic features of the Sea of Oman and the Arabian Sea also are contributing to the expansion of these blooms.