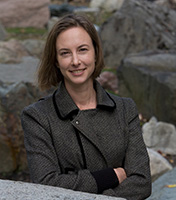 Current research focus: Global research related to fault zone behavior during and between earthquakes. Her primary area of interest involves the observation of fault behaviors that lie outside the standard ‘stick-slip’ model, where faults creep transiently in response to external stress changes. Lohman’s research aims to improve our understanding of the constitutive laws governing stress release along fault zones, as well as the stress within the subsurface. In the future, she hopes to incorporate recent advances by researchers working on the contribution from tides and the hydrologic cycle into her models of fault zone behavior and stress histories.

Research findings: “I have focused on small, shallow sources of deformation, including a M3.2 earthquake that occurred at ~700 meters depth in response to a local quarry blast in Chicago and a weeks-long shallow (<2 km) slip episode in a geothermal area in southern California,” notes Lohman. “Both are areas where the depth range and thermal gradients are such that earthquakes should not nucleate; rather, stable sliding should dominate (i.e., they are ‘velocity strengthening’). Only in the case of sudden stress changes or, potentially, material heterogeneities, should an earthquake be able to occur.”